Are you procrastinating on your dreams? 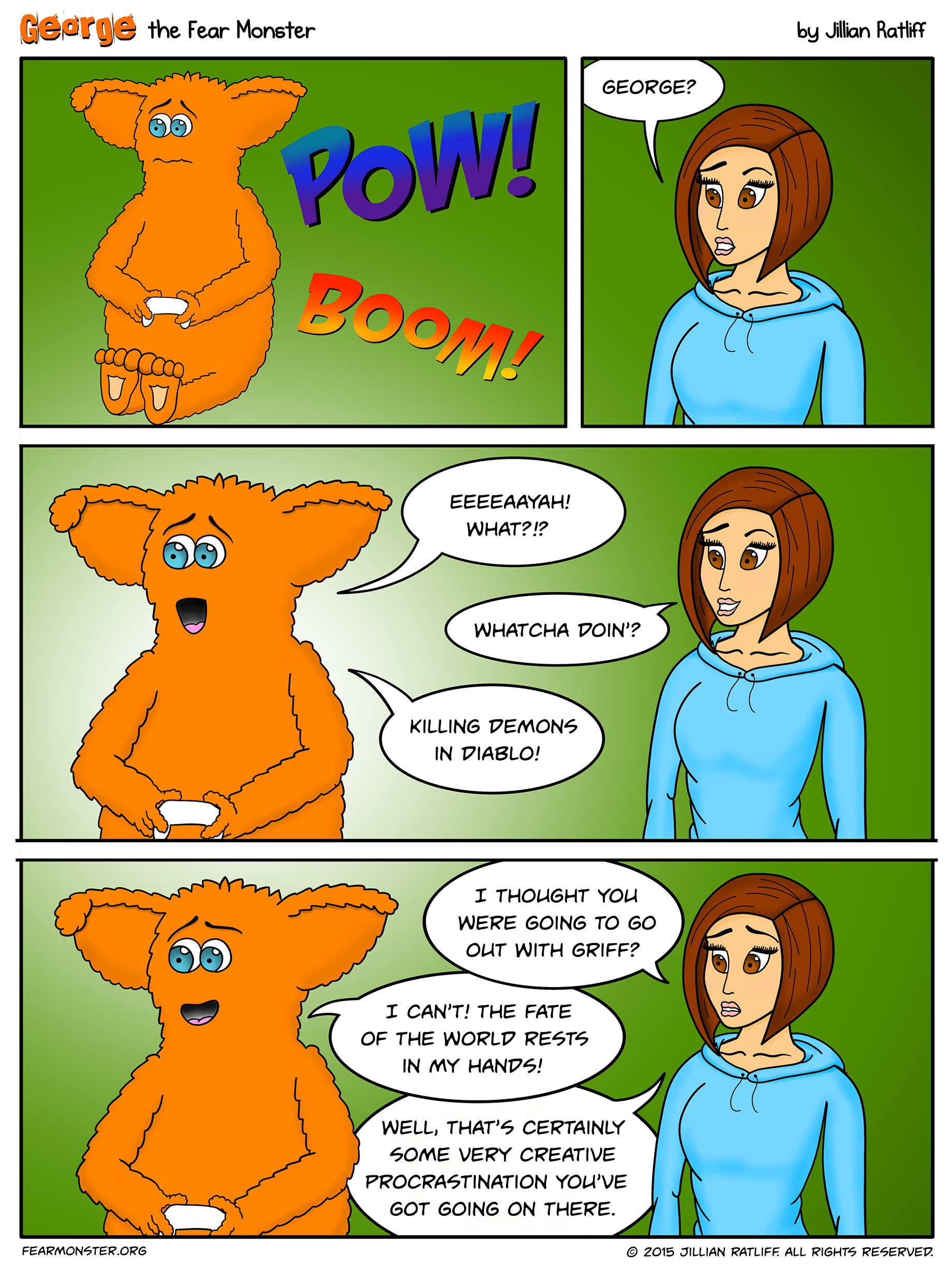 Hi everyone! George missed you! So he wanted me to draw another comic. I've been working very hard on the comic book, and so I have been neglecting the weekly comics, but I'll get back into the swing of things once pre-sales happen!

I've been working so hard that I actually kind of forgot to take some down time. It happens when I get in the zone and I'm really enjoying what I'm doing. I finally slowed down last weekend and played some Diablo. That certainly gave George a few new interesting ideas about the end of the world and whatnot. He's weird. It's just a video game.

1. Regular procrastination is when I just plain don't want to do something. There are certain things I don't want to do, but I have to! Paying bills, for instance. It's never fun, but it's a necessary evil.

2. Then there's what I call "constructive procrastination" where I'm being productive, but I'm not doing the thing that I know I'm supposed to be doing. For example, if I know I need to draw a comic, I'll distract myself with cleaning the kitchen, doing laundry, organizing a closet, etc. until I finally get around to the thing I'm supposed to do. It's at least helpful in that it gets me off my butt and builds momentum. But, it's still procrastination.

3. And then there's "intuitive procrastination" which is when there's something on my to-do list, but the timing just doesn't feel right to me. I have a ton of things on the to-do list and it can be a little overwhelming at times. But I've found that things work out okay if I just remember what the deadlines are. I make a tentative schedule every week for the things that are a priority. But some things just don't get done. Usually, that's because it hasn't been time to do them yet!

And please remember that if you're working towards your dreams, downtime is a part of the process. You can't be going 24x7 without making yourself sick! Taking good care of yourself IS being productive! There is a difference, and I know you know what the difference is!

I hope that all makes sense!

As for George and Griff.... George is being ridiculous. I'll catch you all up with the next comic, but he still hasn't called. Maybe he lost Griff's phone number or something. He's being silly. He's got that whole "fear of rejection" thing going on.

Anyway, I hope you all have a great weekend!! Sending you all love!

Don't want to miss another comic?

Get exclusive content and the weekly comic in your inbox every Fear Monster Friday by entering your name and email here!

50% Complete - Verify your email next

Enter your name and email to be notified when there is a new comic! Be sure to check your email and verify your subscription.